Where we came from and where we’re going 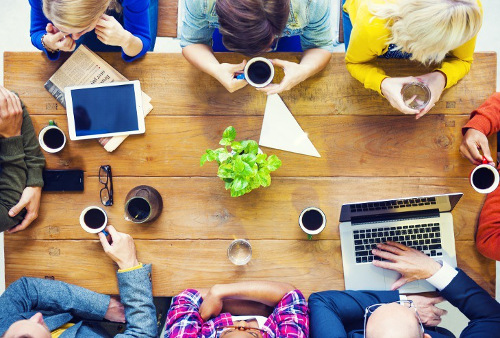 As the weeks roll by I sometimes wonder if there will ever be a normal day at work with Career of the Day. There hasn’t been so far, and I don’t see it happening anytime soon, but that’s one of the best things about working here. As the business manager, I wear many hats and have many roles, as you might expect at a small company – including blogging as of today – so I wanted to give some personal perspective from my first few months working with Career of the Day about where we came from and where we’re headed. Here it goes.

The answer came as a surprise because I genuinely like what I’m doing. I get to help people find meaningful jobs and can honestly say that when I wake up in the morning I almost always look forward to what I’ll be doing that day. However, I knew there was plenty of room for improvement.

I spoke up about my realization and it sparked many debates about how we should start making some changes, so I personally set a goal for Career of the Day. I decided that Career of the Day should be a place where everyone who walks into our office looking for career help will leave wishing they could stay and work with us.

After all, we are experts on getting great careers so we need to start setting a better example about what it means to have a great career. I mean, if it isn’t obvious that we love our work then why should anyone listen to us?

Our current team of 7 staff members come from 6 countries across 5 continents. We all know the struggle of finding meaningful work in Australia. And we are all excited about being in a position where we can help others do the same. But you probably wouldn’t have thought so if you’d come into the office a few months back.

The Career of the Day office was everything but exciting. It was quiet, rather empty, and for a lack of a better word, dull. For my first couple of days the occasional ringing of the reception bell seemed to be the only thing breaking the silence other than the ongoing whirr of the broken air-con system. The business was doing just fine, but everyone was just minding their own business and typing away at their computers. After only a couple days I had had enough. I decided it was time for some changes.

I was used to ping pong tables, beanbag chairs, pinball machines and in-office beer kegs from my time working in the startup scene in Vancouver. But there was none of that to be found. No coffee machine. No music. No collaborative space. There wasn’t even a table we could sit around for lunch.

Now, I may have been spoiled in Vancouver, but I certainly didn’t want to go back to the boring “corporate” workplace vibe. So I articulated my plan of creating a better workplace, and luckily the rest of the team was more than okay with the change. Technically we’re not a startup, but I figured there’s nothing wrong with acting like one.

Now, maybe in-office beer taps and napping stations like what they’ve got over in San Francisco are a bit over the top for a company of seven, but I’d seen some amazing startup-type offices with great cultures and I wanted ours to be no different.

Sprucing up the office was a start, but just a small part of the plan we had put in place. The “plan” wasn’t very elaborate, we pretty much just decided we needed to start building a culture. But hey, you’ve got to start somewhere.

Over the next couple of weeks we started to make some changes. We started putting together a new website and found a couple new ways to offer helpful services to job seekers. We even got a coffee machine! Things started to fall into place, but nothing groundbreaking had happened yet and we still didn’t have a clear direction of where we were going.

I was certain of one thing though, I knew that if we were going to be giving out career advice then we had better be able to back it up. That concept is still fundamental for the direction the company is headed.

We’re all about great careers, and everyone has their own definition of what that is, but I think a great career isn’t one that simply gives you a steady pay check or lots of vacation. To me, a great career is one that you can tell your friends about and they’ll be jealous. They might even ask to come work with you.

I now know great things are coming for Career of the Day because that’s exactly what happened to me recently. During a recent Skype chat with one of my best friends from university (near Seattle, where I grew up) I was bragging about how great my life has been since I moved to Melbourne and started working with Career of the Day. Long story short, he dropped everything, booked a one way flight to Melbourne, came to work with us for a month helping us get some new systems in place and then we found him an awesome job once he settled in. He said it’s one of the best decisions he’s ever made.

I can gladly speak with more conviction now when I give career advice because I know that I’m fortunate enough to be in a position that others would love to be in. I know that the work we’re doing at Career of the Day is awesome. I’ve been able to help people get great jobs and internships and knowing that is a great feeling. And it’s becoming a place where people want to work because they see that we can have fun and make a big difference at the same time.

Moving forward, Career of the Day will be able to provide many more opportunities for job seekers. We’re placing candidates in more and more internships at some great companies around Melbourne and expanding our list of exclusive job openings. We’re able to boast a growing user base of both job seekers and employers to match them with. We’re expanding our resume products and services. We’re partnering with overseas universities to get their students experience in Australia, and we’re able to provide affordable full-scale recruitment, sponsorship services and much much more.

I could go on and on about all the cool things we’re working on, but you’ll have to stay tuned as we roll them out.

At the end of the day our biggest emphasis has been on taking a customized approach to the job searching process. Now that we’re on the right track, we can pretty much do it all.

Whether you’re a foreign graduate who is new to Australia or you’re just looking for a career change, we can help. Finding a job isn’t easy, but you certainly shouldn’t have to settle for anything less than your dream career.

If you’re looking for a career improvement, give us a call. We’d love to help!

Ryan Evans
Prior to joining Career of the Day in 2014, Ryan worked in a variety of roles near Seattle, WA, where he grew up. In 2012 he started his own contracting business and led the first international expansion of a large US company into Canada. He then went on to work as a business strategy consultant for various startups in Vancouver, Canada. After moving to Melbourne in early 2014, he graduated from Western Washington University and joined Career of the Day. As the Senior business Manager, Ryan uses his broad international experience to develop and implement new products and services for Career of the Day's largely international client base.
Previous post
Next post